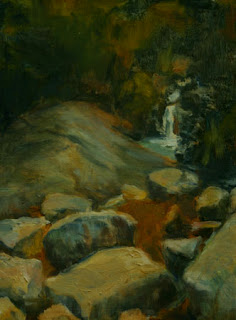 6"x 8" oil on panel
SOLD
A quiet moment for painting in New Hampshire on a camping and hiking trip. 100 years after the Impressionists, painting en plein air is still a challenge, even with the modern comforts of automobiles and electric coolers and down sleeping bags, etc. How did Monet, et all ever do it? (In fact, I think they were far better off without some of our so-called "conveniences"!)
Posted by Judy at 5:05 PM No comments: 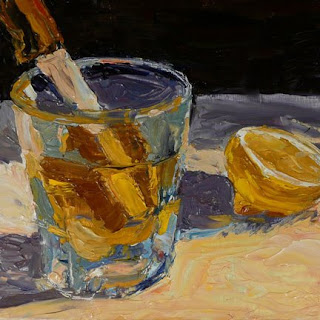 6" x 6" oil on board
SOLD
One of my favorite recent (still-life) paintings, in terms of achieving what I wanted: using thick, buttery impasto both to convey a lusciousness of surface texture (so you're aware of the paint), but also to convey the reality of the objects shown. This was particularly challenging with the smooth, transparent surface of the glass, as you might imagine, so I'm pleased with the result.
Posted by Judy at 4:27 PM No comments: 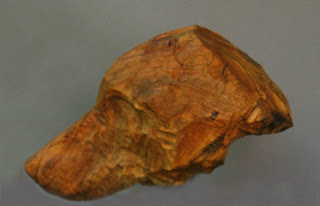 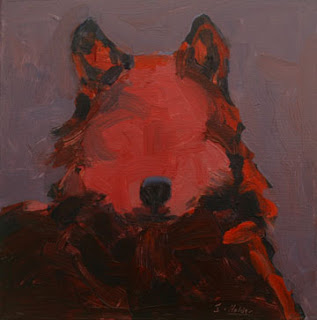 8" x  8" acrylic on panel
At a recent art show someone walked into my booth and asked "Why did you paint that dog without eyes?"
If you have to ask....
This painting was but one of a series I've done lately influenced by Fritz Scholder.  While I was in art school earning my BFA, the emphasis was on traditional Western European art; although Scholder had been a major figure in the 20th Century art world for decades, I discovered him only very recently, and quite by accident.  (I believe it was from a book I found at the Connecticut College library, which is a wonderful resource.)  I had no idea until just a few months ago that he had died in 2005; I only knew him through the works I was studying, and so to me he was (and is) very much a living presence.  (I'm not sure that I ever bothered to look up his biography, so focused was I on his prints and paintings, and absorbing all he could teach me about color and form.  What can I say?  I'm an artist.)
The National Museum of the American Indian is having a major retrospective Scholder's work in NYC and in D.C. which I hope to see this year:
http://www.nmai.si.edu/exhibitions/scholder
Posted by Judy at 7:19 PM No comments: 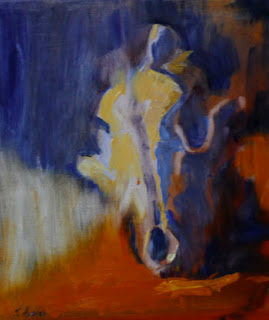 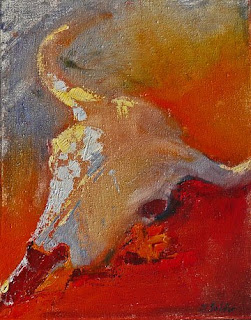 Last month I entered two paintings into the 2008 Opened Juried Show at the Farmington Valley Arts Center in Avon,  CT.  The show is called Interpretations and Inspirations, juried by Philip Janes.    These two canvases were accepted into the show.
Animal skulls lend themselves to much interpretation and reflections of color.  I see the skull not just related to death but a structure that life emanates from.  Of course, the childhood fascination for digging up things in the backyard or woods that your parents find weird or dirty ("Don't you dare bring that thing into the house!") - and the ability to hold onto that fascination into adulthood - is a very useful tool for an artist!
Check out the Farmington Valley Arts Center website:
www.fvac.net/
Posted by Judy at 7:17 PM No comments: 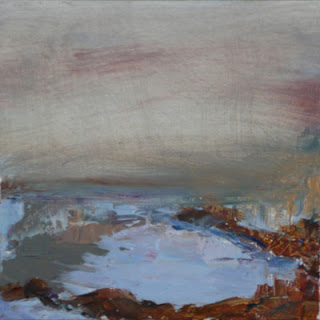 6" x 6" oil on panel
After painting this ocean scene of haze, mist and still water I found my painting finished in a moment of wiping out the upper part.  A momentary flick of the wrist, a swipe with an undignified rag and the deed was done, but it was exactly what this work needed.  The creation of a work of art is so mundane in the processes and yet it continues to be so mysterious in the results.
Posted by Judy at 8:07 PM 1 comment: 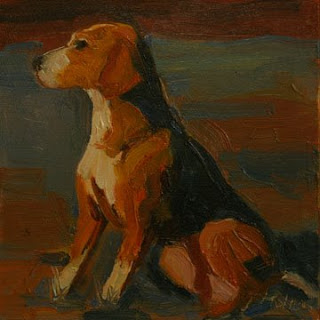 5 x 5 inches, oil on panel
SOLD
Sometimes I want to "say something" with my art, sometimes I just want to take pleasure in the textures and forms of my subject - in other words, give myself permission to have a little fun.
Posted by Judy at 6:34 PM No comments:

6 x 6 inches, oil on panel
As with the previous painting, this is an image of bison skull I sculpted, rather than an actual skull.  (Which, in turn, was copied after an genuine skull, which still hangs on my wall.)  This is also another palette knife painting, and the physicality of painting this reminded me of how it felt to lay down pieces of clay to create the original sculpture.
Posted by Judy at 7:15 PM No comments: 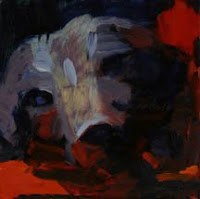 6x6", oil on panel
Wolves have always felt like kin to me.  No, this is not a painting from a live wolf; I painted this image from one of my sculptures.  I turned the studio lights down low, just enough to see my paints, and lit the wolf head from the side.  When the painting began,  I had no idea how it was ever going to turn out.  In fact, I embarked on the process expecting it not to work because the room was so dark!  Now and then I turned the lights on to see what was happening.  I was surprised to see the image of the wolfhead appearing before me on my painting panel, in a way that seemed magical to me.
Posted by Judy at 10:49 AM No comments: 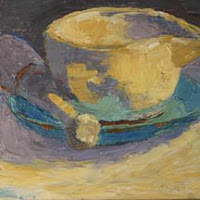 This was painted the same week I painted "Cup a Day" in the previous post.  I chose a similar color palette but a much different textured effect, using a palette knife rather than a brush.  It's an old technique, but for me there is still something new and even exciting about using the knife rather than a brush.  Working with impasto is like literally sculpting in paint for me; I love thick textures, which only the knife can really shape to my satisfaction.
Posted by Judy at 10:40 PM No comments:

A Cup A Day 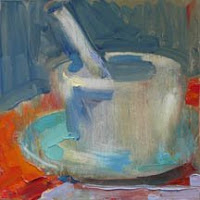 6 x 6" oil painting on panel
Originally I was attempting a more "representational" image, but the result was lifeless.  So I decided to take a risk and literally wipe it out.  In the process of finding the lights, I was able to complete the painting.
Posted by Judy at 9:02 PM No comments: